Wetsuit Vs Drysuit For Kayaking – Which Is Best And Why?

When you’re kayaking during the warmer months, what you wear isn’t that big of a concern – as long as it’s comfortable, moisture-wicking, and protects you from UV rays, you’re all set.

But when colder weather rolls around, you generally have two options:

Put your kayak in storage – or put in some serious thought into your kayaking clothes.

Choose the latter, and you’ll need a full-body suit that’s suitable for the environment. But should you get a wetsuit vs drysuit for kayaking? What’s the difference, anyway – and which one’s better?

This guide will provide some much-needed answers!

We may receive a commission if you click a link on this page and then go on to purchase something, but at no extra cost to you. Learn more here.

Why Would You Need A Wetsuit Or Drysuit, Anyway?

First and foremost, I need you to remember that kayakers should always dress for the water – and not the weather. That’s the number one rule of choosing appropriate kayak clothes, even in the summer – let alone during the colder months.

Things can go south fast. Before you know it, your kayak’s flipped over – and you’re swimming for dear life.

Unless you’re wearing appropriate clothing, that is.

Always dress for immersion. Wearing clothes, such as an exposure suit, that keep your core body temperature stable even after you’ve been immersed in cold water will drastically increase your odds of survival.

Don’t be fooled into thinking that wearing a wetsuit or drysuit is reserved solely for those into cold water surf sports or scuba diving. Yes, the technology might have been pioneered by scuba divers and surfers but everyone exposed to cold water conditions should be wearing one.

The mere shock your body goes through when immersed in freezing water is one of the biggest jolts that you’ll ever experience.

It’s instant, immense, and it sets off a chain of possibly lethal shock reactions.

For the first minute or so, you’ll be gasping for air, which may lead to drowning. Hyperventilation will kick in soon after, causing rapid, out-of-control breathing.

Even if you manage to survive the initial cold water shock, you’re still at risk of hypothermia that can turn deadly – even after you’ve got out of the water.

The average human has one minute to get their breathing under control, ten minutes to attempt self-rescue and one hour before they succumb to hypothermia.

Kayaking Drysuits 101: What Is A Dry Suit & How Does It Work?

As the name implies, kayaking drysuits are designed to keep the paddler dry – but unlike the neoprene wetsuits, they don’t act as an insulating layer themselves.

Drysuits are merely an outer layer – a waterproof shell, if you will – that has to be paired with a warm, moisture-wicking base and mid-layer to keep your core temperature under control. They feature a combination of waterproof fabric and neck seal, wrist, and ankle gaskets – watertight seals – to keep the water away from the body.

Drysuits are baggier and loose-fitting – except for the watertight gaskets – to accommodate the layers underneath. The extra bulkiness may feel a bit more restrictive, but in water temperatures below 45 degrees Fahrenheit, a drysuit is the only practical way to remain dry and warm.

You’ll find that drysuits come in a few different designs.

Based on the zipper’s placement, kayakers can choose between front-zip and rear-zip drysuits. Two-piece designs, with a waterproof zipper joining the top and bottom parts, are also available.

And given that latex allergy is a thing, semi-dry suits can be a good alternative. Instead of latex, they feature neoprene gaskets that are a bit more comfortable around the neck and wrists – but they’re not entirely watertight.

Kayaking Wetsuit 101: What Is A Wetsuit & How Does It Work?

Unlike drysuits, wetsuits for kayaking are designed to keep you warm – but not dry. You’ll find that wetsuits come in several styles, including:

Wetsuits use neoprene – a flexible, semi-permeable, hard-wearing material – to trap a thin layer of water between the suit and your skin. Your body warms up that layer of water and brings it up to your body’s temperature.

Together, this water layer and the neoprene suit create a thermal barrier that prevents heat loss – even though you’re technically wet.

The insulation that wetsuits provide depends on the thickness of neoprene, expressed by three numbers. Each number indicates how thick the wetsuit is around the torso, legs, and arms. The wetsuits are thickest around the torso, ensuring that your core body temperature doesn’t drop.

Here are some general recommendations regarding neoprene thickness:

While the actual thickness varies, wetsuits are typically made from closed-cell foam neoprene – a synthetic rubber material that traps millions of gas bubbles which provides insulation even when wet.

As for drysuits, the choice of materials is a bit more varied:

The drysuit’s construction remains the same regardless of material, though. It’s a combination of waterproof but breathable fabric and latex or silicone rubber gaskets to ensure water-tightness.

Wetsuits and drysuits are both classed as being exposure suits, protecting the wearer from the elements –   that primarily being cold water.

Wetsuits provide insulation by trapping a layer of water between you and the suit; the water is warmed by your body temperature and acts as an insulation layer. So, in short, you’ll get wet – but you’ll stay warm.

Drysuits provide little to no thermal insulation on their own. You have to add layers underneath to stay warm – but you’ll be completely dry. That’s what gives drysuits an edge:

In cold conditions when the water temperature drops to 45 degrees Fahrenheit, a drysuit will provide better thermal insulation.

Why?  Well, water is a great conductor and will rapidly cool or wick away body heat – a dry suit prevents this by stopping the wearer’s body from coming in contact with the water.

Lastly, don’t underestimate the cooling effect of the wind.  A cold breeze against a soaked wetsuit will rapidly chill the body – even if you are wearing a 7mm wetsuit!

Wetsuits are a more favorable option for performance in the water due to the skin-tight fit, which ensures greater mobility and freedom of movement. I wouldn’t label drysuits as “restricting,” but the somewhat baggy, loose-fitting ski-jacket style design can be a limiting factor in the water.

Swimming, for example, is generally a lot easier in a wetsuit.

If you’d like to combine kayaking with other in-the-water activities, such as standup paddling,  then sure, consider wetsuits as the less restricting option.

You’ll spend most of your time out of water – in a kayak – though, so a drysuit would be a better option because of its waterproof characteristics.

Wetsuits have to be tight-fitting to trap water that acts as insulation. Otherwise, the suit doesn’t work as it’s supposed to and, in turn, won’t keep you warm – just wet.

On the other hand, drysuits are baggy and loose-fitting – because they don’t need to entrap water close to your skin to maintain insulation. The baggy fit is there to allow enough room for layers you’ll wear underneath.

Quite the contrary, water inside a drysuit is the last thing you want, so they are fitted with water tight gaskets at the neck, hands and feet to prevent water ingress.

Drysuits for kayaking require a lot more care and maintenance – especially when it comes to the zippers and seals, the most delicate parts of a drysuit.

Besides cleaning after each paddling session, you also have to apply a spray-on waterproofing solution, take care of zipper lubrication, and treat the gaskets with a UV protectant.

Compared to drysuits, wetsuits are easy to care for:

As for most rubber neoprene products, soak it in fresh water for a good 20 minutes, rinse it, leave it to dry, and store it on a hanger – that’s about it.

The most noticeable difference between a wetsuit and drysuit is; wetsuits are notorious for being hard to put on and take off. A dry wetsuit and a wet body – or a dry body and a wet wetsuit – are two of the worst possible combinations I could think of here.

You’re in for quite a bit of pushing and pulling when attempting to squeeze your way into a tight-fitting neoprene suit.

With drysuits, ease of use mainly depends on the entry zippers’ placement – once you get used to the gaskets, that is.

I don’t think it’s fair to do a wetsuit vs drysuit kayaking comparison, given that comfort’s a highly subjective matter. Some aspects contribute to – or take away from – the comfort when wearing a drysuit or a wetsuit, but it comes down to preference.

Fit-wise, would you prefer a skin-tight fit of neoprene or the bagginess of a waterproof drysuit? What about staying dry? Is that a priority – or are you okay with getting wet as long as you’ll be warm?

Some drysuits have a relief zipper; others do not. But comfort and convenience-wise, you’ll want one. It sure beats peeing in a wetsuit.

Drysuits are designed to keep the paddler dry, but on their own, they provide little to no thermal protection. That might sound like a disadvantage – but it contributes to the drysuit’s versatility:

You can adjust the level of thermal protection depending on the environment you’re kayaking in by simply wearing more or fewer layers under it.

As such, drysuits are suitable for year-round use. On the other hand, wetsuits are limited by the thickness of the neoprene material, making them less versatile.

A drysuit for kayaking will probably cost you at least $500; some higher-quality models can cost well over a grand. You could likely buy at least two high-quality wetsuits for the same amount of money.

So, yes, there’s a significant difference between wetsuit vs drysuit for kayaking in terms of cost.

But while wetsuits have the advantage budget-wise, drysuits offer hard-to-beat durability. It’s not uncommon for a drysuit to last a good 15 years, as long as it’s properly maintained. 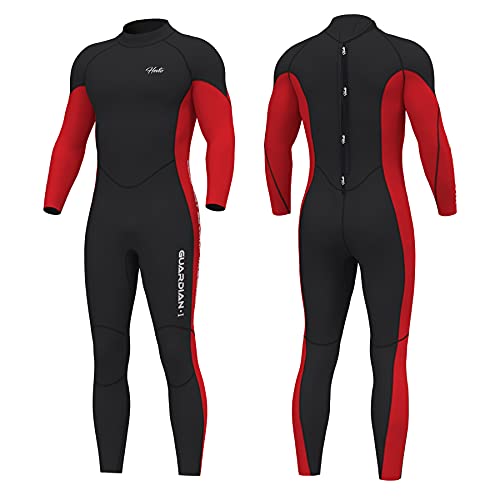 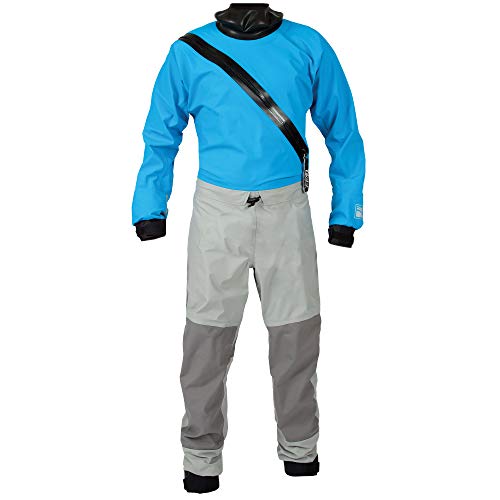 The drysuit vs wetsuit  for kayaking debate comes down to the weather and water conditions that you’ll encounter while paddling: